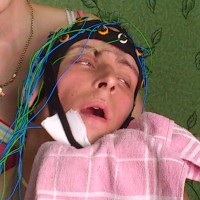 Diagnosis: Consequences of acute opened penetrable CCI(21.01.12), injury-crash of the brain, operation (21.01.12) for trepanation of skull with deleting of cerebral detritus and free fragments of fractures of frontal bones, plural intracranial hematomas, operation (04.04.12) from the plastic of the skull stem in the area of front cranial fossula, apallic syndrome (vegetative state) on the stage of akinetic autism, 2-3 levels after the Ranch of Los Amigos scale with deep expressed spastic tetraparesis, more to the left by hemitype, total aphasia, astasia, abasia, deep intellectual-mnestic delay, neurotrophic disorders, total vegetative disfunction, parafunctions of pelvic organs, bending contractures of humeral, elbow, radial-carpal joints and rough bending contractures of hip and foot of shin joints.

Amount of the treatment courses: 12 for 3 years

Three years ago Roman was considered a doomed patient in vegetative state. Eight courses of intensive treatment and rehabilitation in the Clinic of healthy vessels allowed to turn him to consciousness, restore thinking, set his on feet and form walking.

Roman’s walking with his mother on July, 22, 2014 on streets, first independent steps. In future he is waiting for a difficult operation – closing of the trepanation defect of his skull, superciliary arch, closing of the tracheostomic opening on a background of the trachea stenosis.

10.2014 – final stage of the rehabilitation During trainings

August, 2014. Roman successfully stood a difficult operation. After the operative intervention, closing of the trapanation defect, saturating of the tracheostomic opening, Roman started a new, fundamentally different stage  of the rehabilitation, directed to skill forming for self-service and providing own necessities, forming  of sound and language vocalise

Article about Roman in “Ukrainian newspaper”